We had been out of the “baby stage” for a while now, with C being 3 and J being 5. But now that E is here, we’re back in full force and safety is definitely on our minds. And did you know that September is National Baby Safety Month? It’s a great time to be aware of steps to take to keep your infant safe. With safety on the brain, I was excited to discover all of the products from Munchkin to help keep babies safe. We received the Munchkin Childproofing Kit, which includes:

They have other items, if you don’t want a whole kit but are looking for specific safety gear:

Are you gearing up to keep your baby safe? What’s the most crucial safety item in your house? I think it’s plug covers for us. What’s your opinion?

Note: I received a Childproofing Kit to facilitate this post. I was not compensated monetarily. All opinions are honest and are my own.

Brian has always been a big comic book and superhero fan, so it only makes sense that our boys would be too. They haven’t seen any of the movies yet since they’re just 3 & 5, but you better believe they know who the Avengers are and can tell you their names. And they LOVE to play like they’re superheroes too – our five-year-old, J, likes to be Iron Man, and our three-year-old, C, especially likes Captain America.

Since we have small children at home we don’t make it to the theater as often, so we are especially excited for the release of the Avengers Blu-Ray/DVD/Graphic Novel Combo Pack from Walmart – #MarvelAvengersWMT – on Tuesday, September 25. Brian and I can’t wait to watch it! The boys are a little young for the movie but since they love Avengers so much we knew it’d be fun to have an Avengers Family Fun night to celebrate the movie’s upcoming release.

Before I went to buy things for our night, I downloaded the Avengers Augmented Reality App on my iPhone. I just went to the App Store and downloaded it (it’s free!). I knew when I headed to Walmart that I wanted to get some fun Avengers toys that the boys could be creative with and play pretend. Right off the bat I went to the Lego sets, because that is such a fun family activity to build together. I found two sets – one featuring Captain America and one featuring Iron Man. Perfect, right? I also got them each an action figure, because what little boy doesn’t love those? I got some tiny figurines called Zerbos, some Pez dispensers, and to go with our MarketSide pizza for dinner I got them Avengers cups to drink out of. I really wanted the evening to be all about playing and fun! Here are some of my finds: While I was at Walmart I had a lot of fun finding the trigger points and using the Avengers Augmented Reality App. Over by the toy section I found a DVD display featuring Avengers heroes. When I used the app with it, I was able to take a quiz telling me which Avenger I am. I loved how the graphics on the app really integrated with the display. I was also so impressed with the MarketSide pizza display. For one thing, it’s just a lot of fun to have the characters on the pizza boxes – but the interactivity on the boxes with the app is SO cool! We tried ours at home and loved how the 3-D city popped up complete with Avengers zooming around. The pizza was huge and made a great – and fun – dinner option for the four of us. For more pics from my shopping trip, check out my Google+ story! We also got the graphic novel that comes as a limited edition item in the Avengers combo pack – it is so nice! Like I mentioned, Brian is a big comic book fan and he was impressed. The boys loved looking at the pictures in the book too! On our Family Fun Night we had a blast! We built the Lego sets, played Avengers with the action figures, enjoyed our MarketSide Captain America pizza, and had Pez from our Avengers dispensers for dessert – so fun! Now that we’ve spent a lot of time playing Avengers with the boys I’m even more excited for the Avengers movie release and can’t wait to get the combo pack at Walmart! It will give Brian and I a fun date night in, for sure.

Note: I am a member of the Collective Bias™ Social Fabric® Community.  This content has been compensated as part of a social shopper insights study for Collective Bias™ and Marvel. All opinions in this post are honest and are my own or those of my family. #MarvelAvengersWMT #CBias #SocialFabric

Congratulations to the following winners: 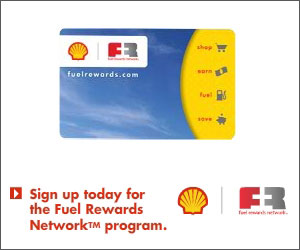 I love saving money, and with how much gas we use, saving money on gasoline is especially appealing to us! I don’t want to have to open up a credit card in order to get savings, and thankfully now you don’t have to – there’s a great Fuel Rewards program available at Shell that lets you easily save money on each gallon of gas you purchase. The program is available at participating Shell stations in more than 100 markets throughout the U.S. and will be available in nearly 200 by the end of the year. It’s really easy to sign up (and free!) – just go to fuelrewards.com and register for a card, or pick a card up at your local Shell station to register. Here’s what the online dashboard looks like – it’s really user-friendly: Did you notice my rewards are $1.50 per gallon? With this program you can stack rewards to earn a lot off each gallon… but guess what? I get to give away four cards that are each loaded with the same $1.50 per gallon savings. That will really add up on a full tank of gas!

FOUR winners will each get a Shell card pre-loaded with $1.50 per gallon savings! This contest is open to all U.S. residents aged 18+. Entries will be accepted until the end of the day (midnight Central) Monday, October 1. By entering this giveaway you agree to the Official Rules.

Note: We received a Fuel Rewards card pre-loaded with a discount to facilitate our review. I was not compensated monetarily for this post. All opinions are honest and are my own.

I’m sure many of you have heard of Gilt before – it’s a site that provides access to today’s top designer labels at up to 60% off retail. They offer deals for women, men, kids and home as well as exclusive local services and experiences, and one-of-a-kind travel packages.

Gilt is now excited to announce the launch of their own collection for its Baby & Kids division: Little Gilt. The collection launches tomorrow, September 17, and will feature apparel and bedding for babies and kids. The first sale will feature 17 styles of baby apparel, ranging from onesies and footies to two-piece gift sets and bedding. Youth styles will launch later this year. The Little Gilt launch sale will last for three days and will then move into GiltKids.com’s Baby Boutique, which gives members daily access to high-quality essentials for little ones.

We got a chance to preview some onesies from the new line – Ilovethe classic styling, saturated but not-too-bright colors, and quality craftsmanship. These are sized 6-9 months so it’ll be perfect timing for E to wear them this coming spring. Aren’t they great? Note: I received onesies to facilitate my review. I was not compensated for this post. All opinions are honest and are my own.

Wonder why I haven’t been posting as much this past week? If you’re like me – and many other people I know – your friends and family are scattered around the country. Technology makes it easier to keep in touch (thanks, email and Facebook) and now thanks to online retailers like Wayfair, you can easily have a gift registry for your baby-to-be or your engagement. This allows people to go online, place an order, and have it shipped right to your doorstep. Another perk of using Wayfair is that they’ve got pretty much everything on their site, giving you a wider range of things to include.

Check out a few of the baby registry options from their look book: And of course don’t forget all the many ideas for things to add to your wedding registry too: We got a chance to review a piece of nursery furniture from Wayfair – this white swivel vanity: It was easy to assemble – the directions were very clear-cut and pieces were labeled with little stickers. Our only issue was that the screw for one of the pegs broke, so we’re just using 3 of the 4 pegs on the side, but we will remedy that down the road. As you can see in the photos above, this unit provides a lot of storage space. And we’re not even using the two little cubbies at the bottom right now – they’ll be perfect for shoes! It’s great right now to prep with items for a newborn (and I love having little dresses hung on the sides) but I can see how this piece can really grow with a child – and it’s even got a full-length mirror on the back (not glass, for safety): As I mentioned, the whole unit swivels, making it easy to switch between the storage side and the mirror. In our case we decided to put a lamp on top, so we’re not using the swivel feature now but I know we will in the future!

Note: We received the vanity from Wayfair to facilitate our review. I was not compensated monetarily for this post. All opinions are honest and are my own.

As I can tell you from recent experience, it can be a challenge coming up with a name for your baby! You want to pick a name that fits now, and that they’ll grow into, and that fits with your last name. Oh, and of course you also, if you’re like me, have names you want to avoid because of negative association.

Picking a name can be difficult too because you might find something you love, but then other people decide to start giving opinions. I’m not talking about people whose opinions you really value – I mean the grocery store checker or other random people who happen to ask what names you’re considering.

When we were first picking a name for our daughter, we looked at a few names in particular – Evelyn and Hazel were at the top of our list. We like old-fashioned names, but not everyone agrees with us and we definitely had people tell us they didn’t like one or both of those names for one reason or another.

Belly Ballot is a FUN way to let family and friends in on your baby naming. You pick five names and then let them vote on their favorites. For one thing, you only invite who you WANT to invite, so you’re not going to get an unwelcome opinion from your neighbor’s cousin’s girlfriend’s sister. And they’re voting on the names they like best, so you’re only seeing the positives and aren’t getting negative feedback. Plus, since it’s online it’s a way to involve friends and family that might be far away and feel disconnected.

Click here if you want to check it out for yourself or share with expectant friends – or if you’re like me and just have a blast looking through baby names. :)