I am one of those that LOVES Valentine’s Day. It can be hard to come up with a good gift idea, especially for someone who has everything… and guys don’t really want a bouquet of flowers, so it can be difficult for girls to find gift ideas for the men in their lives.

Are you needing an idea too? Well, I’ve got one… check out the boxes in this photo and there’s your solution – Shari’s Berries! They have a ton of different items from chocolate covered strawberries, wine, nuts, cookies, cake, and more.

Edible Valentine’s gifts are a perfect choice, in my opinion. Who’s got room for a giant stuffed bear? Delicious treats from Shari’s Berries are something everyone can enjoy. I can imagine everyone from my kids to my grandma liking something from their site.

I got a chance to review some chocolate covered strawberries from Shari’s Berries, and I had them delivered to my office. Let me tell you, they were a hit with everyone! They came with a variety of milk chocolate, dark chocolate, and white chocolate – and there are some you can also select that have nuts and other toppings – yum!

The berries came well-packed and were in perfect condition. Doesn’t this photo make you want to dive right in? We were all impressed with how juicy the strawberries were, especially for this time of year. And the strawberries are big, so they definitely feel like a decadent indulgence! I had two dozen strawberries, and they were gone within a matter of minutes – it just goes to show how much everyone – men and women alike – loved them! If you’re looking for a Valentine’s Day gift this year, be sure and check out Shari’s Berries for all of their many delicious choices. AND they have coupons very often – just click here to take a look!

Note: I received chocolate-covered strawberries to facilitate my review. I was not compensated monetarily. All opinions in this post are honest and my own.

Give a Personalized Gift this Valentine’s Day from CafePress.com! I have always been a fan of Valentine’s Day. I think it’s great to have a day especially for showering love on people you care most about! It’s easier for me to think of things to give the kids, but sometimes it can be a challenge thinking of something for Brian. For one thing, he’a got specific interests and hobbies that might be hard to find gifts to fit! Thankfully Cafe Press has a ton of Valentine’s gift options available (and I can make something completely custom, too)!

I took a look at all the gifts for guys – they have everything from phone cases to messenger bags to cups and more! My husband is a big gamer, so it’d be fun to find something that relates to video games for him! He’d love that a whole lot more than some generic box of chocolate from the store, for sure. I think everyone would prefer a personalized gift – it means more, don’t you think? I had fun looking through the “gifts for her” page – I’d love a custom necklace or bag! I think it would be fun to pick something for the kids from CafePress too – a personalized stuffed animal would be really special! What would you get for your loved ones from CafePress?

Note: I received a promotional item as thanks for this post. All opinions are honest and are my own. I’m not the coffee drinker in the house, so when I got an offer to review Barista Prima K-Cups, I knew Brian would be the one for the job. He loves coffee and is the official owner of our Keurig, so he’s a natural fit. He especially likes dark (REALLY dark) roasts, so I was curious what he’d think of this Italian Roast flavor. Here are his notes:

He said it’s his favorite kind he’s tried so far, and we’re planning on purchasing more for him when we run out of what we’ve got. We would definitely recommend Barista Prima K-Cups! Note: We received K-Cups to facilitate this review. We did not receive monetary compensation. All opinions are honest and are our own.

It’s Been a While

It’s been fifteen days since I last posted. I think that’s a record – not that I was trying for one with my lapse.

It’s also been sixteen days since I started my new job. Correlation, maybe?

I love my job. It’s a perfect fit for me, the people are great, and the work environment couldn’t be nicer. Over the past two weeks I’ve been learning the ropes of designing two different magazines – one the first week, another the second – and whew, learning new things is exhausting. In a good way, but nonetheless it’s meant that I’m not left with much mental or physical energy to divert toward my blog as of late.

At first it felt counterintuitive to not post after selecting “purpose” for my word this year. Shouldn’t I be posting with greater fervor, with crafts and recipes galore? Maybe, if that were my purpose. But I’m reminding myself day in and out that my faith, family and friends are top priority. I adore blogging, and am about to have my three-year anniversary with the Frugal Novice (craziness)! I’m finding a balance with it this year, though. Balance was actually another word I considered for this year, but I think it can go hand-in-hand with purpose, so it’s kind of enveloped with my goals for 2013.

I do have some review posts coming up soon for products I received in 2012 (there are some really great things I think you’ll enjoy hearing about), another Great Value baking party in the works (these have been such a blast!), and DIY post on its way. My good friend Kristi has a daughter who was born just five days after E, and we’re doing headbands, onesies, and yes, even legwarmers for them for Valentine’s Day. Can’t wait to share the finished products with you!

Off to tackle a mountain of laundry while the children – yes, all three of them at once! – take naps. I hope you all have an amazing start to your week! 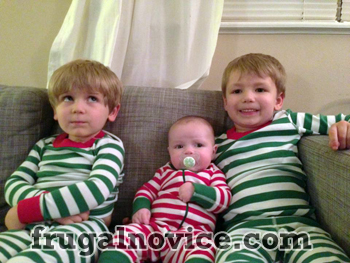 I couldn’t think of a good photo for this post, so I’m including a favorite one from Christmas – my attempt at a sweet PJ pic Christmas Eve night. Instead I got rolled eyes from C, a not-so-happy look from E, and J’s attempt at a convincing smile when all he wanted to do was unwrap one gift as promised. It makes me laugh every time I see it – love these kids!

Well, we’re only five days in to 2013 and I feel like it’s been a whirlwind of a year already.

I started a new job Thursday, designing magazines. I love what I’ll be doing, who I’ll be working for and with, and it’s in the same office space as my husband. I can’t see him from where I sit, but it’s still nice knowing he’s mere feet away – and we can carpool. So, I’ve only worked two days but it’s gotten off to a good start and I feel really good about the change. It was bittersweet leaving my old job, because there are a lot of people there who are wonderful and several who have become dear friends to me, but I feel confident this is the right path for me and for our family.

So, there was that change. And because I’m back to work in an office, that means baby E started day care. That was a rougher transition that starting a new job, although not nearly as traumatic as when J started back in 2008. I guess now I know from experience what a great nursery our day care has, and how well the kids have thrived there, so that helps. But still – as I walked away from her class that first day, there was a slight catch in my throat. She was fine, mind you. They said she did great and was her typical smiley self all day. I was smart and took her for a trial run the day before work began, so she could have a shorter day but I could still get that first day over with. It also helps that one of my great friend’s daughters is in the class with her, so I know she’ll have a little buddy there. When, y’know, they can actually interact with each other a little more than lying beside each other under the play mat arch. But still! BFFs in the making, I tell you.

Another transition is that our three year old, C, moved up to the “big kids” class. It’s the class he should’ve been in this past fall, but potty training challenges meant he was with the kids a few months younger than him. It was a blessing the way it worked out, because the teacher in that class was just what he needed, and he got to experience being a leader, which I think gave him a new level of confidence. Being a younger sibling to a very Type A older brother doesn’t give him a lot of chances to take the reins, and I think he really got to shine in that class. I really felt like it was time for him to move up, though. For one thing, the teacher he has now (whom I adore and think is really great) is much more strict, and I think his little three-year-old self could use some of that.

J’s still in his same class and is excited to be back with friends, which is a total 180 from the whiiiiiiiiiiining we heard on the way that first day – “I don’t waaaaaaaaaaant to go to school!” We’re trying to really make sure and enjoy this first half of 2013, while he hasn’t yet hit kindergarten and the new realms of big kidness. August will bring about a truly big transition for us, and I am trying to steel myself to prepare and not be a blubbering mess at my baby going off to school.

I haven’t blogged since New Year’s Eve, because we’ve been in the midst of adjusting to our new routine, and because I’m trying to really stick to my word – purpose. I want to be more present with the family when we have the opportunities to all be together and enjoy each other, so blogging has been pushed slightly to the back burner. I’ve still got a few commitments to fulfill so I’ll be taking care of those, and I do have some upcoming partnerships I’m excited about, but my hope is to write more posts like this. I’ve shied away from writing too much about our day to day life, because I’ve tried to post content that would be appealing to a broad audience, and I admittedly got swept up in a lot of product reviews. I’ll still do those from time to time (especially here at the beginning while completing agreements previously made) but you’ll notice a reduction in those, or at least more editorial content in proportion to those posts. Brian and I love to cook, and I’m trying to incorporate one new meal each week, so I hope to write more food-related posts this year, too. If you think of anything you want to see on this blog, let me know. I’m always looking for ideas!

Have a wonderful rest of the weekend, everyone.