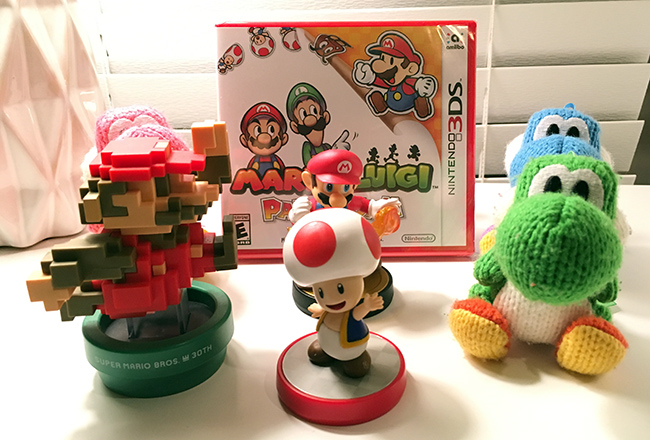 My husband is the ultimate Nintendo fan, with a collection including hundreds of games dating back to his childhood and the NES era.  Since he has had experience playing Mario games for decades, he eagerly agreed to review the advance copy we received of Mario & Luigi: Paper Jam, which releases today. Thanks for guest posting, Brian! Hi everyone! As Christi mentioned, I’ve been playing Mario games most of my life, and always get excited for the latest game release. When I think of Mario games, I divide them into several categories; some are platformers, like the classic Super Mario Bros. – your character’s main goal is to get to the end of each level. Some are party games, like the aptly named Mario Party, which include party games and challenges that are fun to play with your family and friends (this is a favorite of our family on game nights!). And some are RPG (role playing games)-based, which means there’s an emphasis on character development and more tactic-based battles. Mario & Luigi: Paper Jam falls into the latter category, and to me it’s a great fusion of the Paper Mario games and Mario & Luigi game series. Like most Mario games it starts out with Bowser kidnapping Princess Peach, and you play as Mario to rescue her.

This time, though, you’re dealing with double the trouble, thanks to Luigi unleashing Paper Mario characters into the 3D world. Now you’re tasked with rescuing not one but two princesses from Bowser & Paper Bowser (not to mention their army of dastardly villains!). No worries, though!  Paper Mario is there to help with the challenge. Not only does he help you battle, he also brings unique skills to the table, like slipping through cracks, making copies of himself and folding himself up.

Paper Mario can even combine with Mario & Luigi for super powerful Trio Attacks that flatten enemies and transform Paper Mario into useful objects like ninja stars.

Another new feature for this series is the amiibo functionality. In each battle you can harness an amiibo’s power up. For example, I used a classic Mario amiibo and was able to get a 30% bonus on all gold during battles. In battles there are also specific challenges you can complete to get in-game bonuses. Think of them like achievements you get for a job well done in battle, like dodging a certain number of attacks, for example.

The game isn’t all just a fight to the finish, though. This game has a great story to it with plenty of funny moments (a characteristic standard in both the Mario & Luigi and Paper Mario series). As a fan of the previous games in the series, it’s great having the two worlds collide in a fun new adventure. I’ve had a blast playing through the game so far, and my 8 year old can’t wait to get his hands on it, too. Mario & Luigi: Paper Jam has the unique position of being a game perfect for gamers of all ages, and I’m glad to be able to keep a love of Mario games going strong with our kids!

Don’t forget, Mario & Luigi: Paper Jam is available for purchase starting today! You should be able to find it at most major retailers, and you can find it online too. And for more information on the game, check out the Nintendo site. Happy gaming!

Skylanders Imaginators Multiplies the Imaginations – and the Fun!