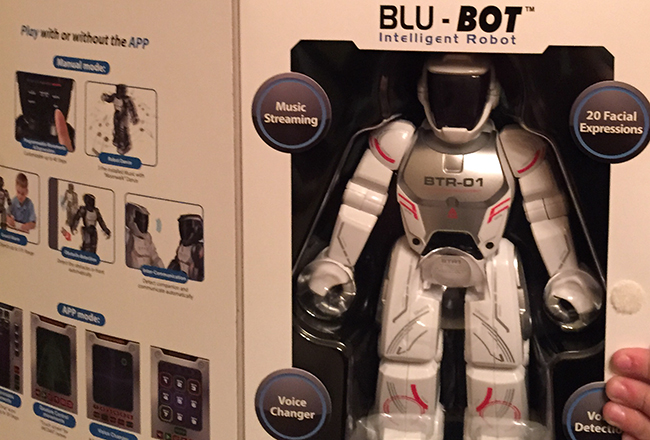 We received a Blu Bot Robot from Silverlit to facilitate this post. All opinions are honest and are our own.

Our oldest son, who’s 8, has had a robot on the top of his Christmas list for months. To be honest, we were a little hesitant to buy him one because we weren’t sure if it’d be something he’d lose interest in quickly. When I got the opportunity to try out the Blu Bot, it was a great chance to test the robot waters. The Blu Bot is available from Silverlit and has two modes of play:

If you want to do Bluetooth mode, there’s a free app available from the app store that’s easy to use and have a lot of fun with.

The bottom line is this: The Blu Bot is a great starter robot. It has some programmable movements which kids will have fun with, and the spy function is something straight out of movies (and who doesn’t want to have a tool in their arsenal with a little brother or sister around?). Our boys had fun with it and argued over who got to play with it next. A few weeks out they play with it a lot less, but at its lower price point I still feel like it’s a worthwhile purchase if your child really shows a lot of interest in robotics.

Take Your Phone’s Photos to the Next Level with Olloclip