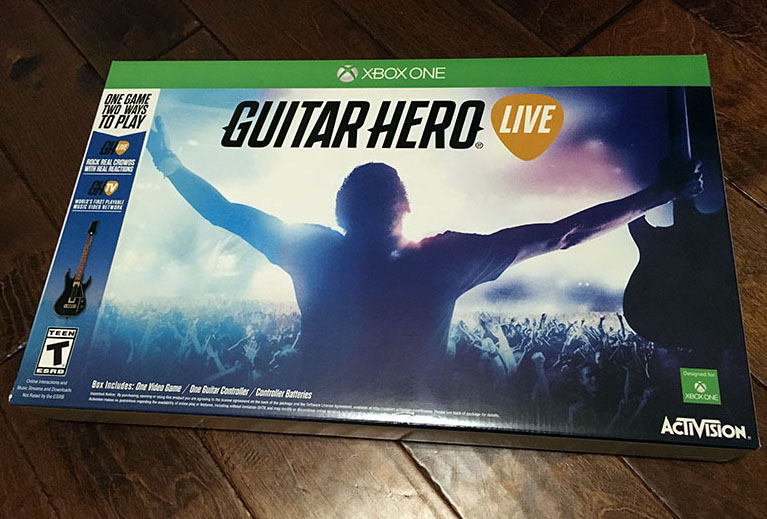 This guest review is written by my husband, Brian. He’s the gaming expert in the family.

The latest from Activision in the music game genre is Guitar Hero Live, a fresh new take on the guitar rhythm concept. Gone is the 5 multicolored button plastic guitar, and their latest hardware feels much more like you are playing a real guitar, rather than a toy.

Even at first glance on the box art, you can see this new perspective on the gameplay is evident, showing real people rather than animated graphics. The back of the box is the first to tell the player of the two game modes, Guitar Hero Live and Guitar Hero TV. The first is familiar to veterans of the game series, playing through individual songs in a large show format. The second is a new take on the series, allowing the player to play along to other songs in the rock and roll universe, playing along with music videos of your favorite artists! The song list of the tracks available in the base game is quite extensive, and bridges across multiple genres of music, from standard rock artists like Soundgarden and Pearl Jam, to unique tracks from artists such as Skrillex, Katy Perry and Rihanna. Opening the box reveals the new hardware and software for the title, including the guitar, a dongle to plug in via USB to connect with your system (Xbox One represented here), guitar strap, the game, batteries, and instructions to get started.

I wanted to point out how nice the details are in the package, including the logo on the dongle, and actual good quality batteries instead of cheap off-brand ones that would fail after a few hours.

As you can see, the guitar comes in two pieces, to better fit in the box and for travel, but is easily pieced together and ready to rock in a snap. After assembling the guitar, you will instantly notice the buttons are different from any other music game available before! Now instead of 5 single buttons in a row, there are two sets of 3 buttons stacked up on top of each other. Once you fire up the game and start playing, you will see the notes highway is different as well, with 3 “strings” to follow, each with either a white, black, or combo button on each during the song. The black notes signify the top row, the white the bottom row, and both means exactly that, hold both buttons on that fret. Later in difficulty, you will have notes that signify different colors for each fret, so you really start to feel as though you are holding actual guitar cords.

Here are some screenshots showing the Live gameplay mode. This new mode uses live video rather than animated characters for background visuals, really making you feel as though you are ON STAGE while rocking! The other mode to play in is a new edition to the series, getting to play along with music videos from your favorite artists!!! Not only that, you get to compete with other rock stars online and earn credits to spend in the store for swag and customizable features in your game. All in all, Guitar Hero Live is a breath of fresh air to the music/rhythm genre, and one that I welcome! From the live video backgrounds, to the new button layout, and the varied selection of music to play in TV mode, Activision has brought its A game after being on pause since the last Guitar Hero game. And with the new button config, never before have you felt more like playing an actual guitar!

Save Money on Gas with These Apps

Christmas Decor with a Twist